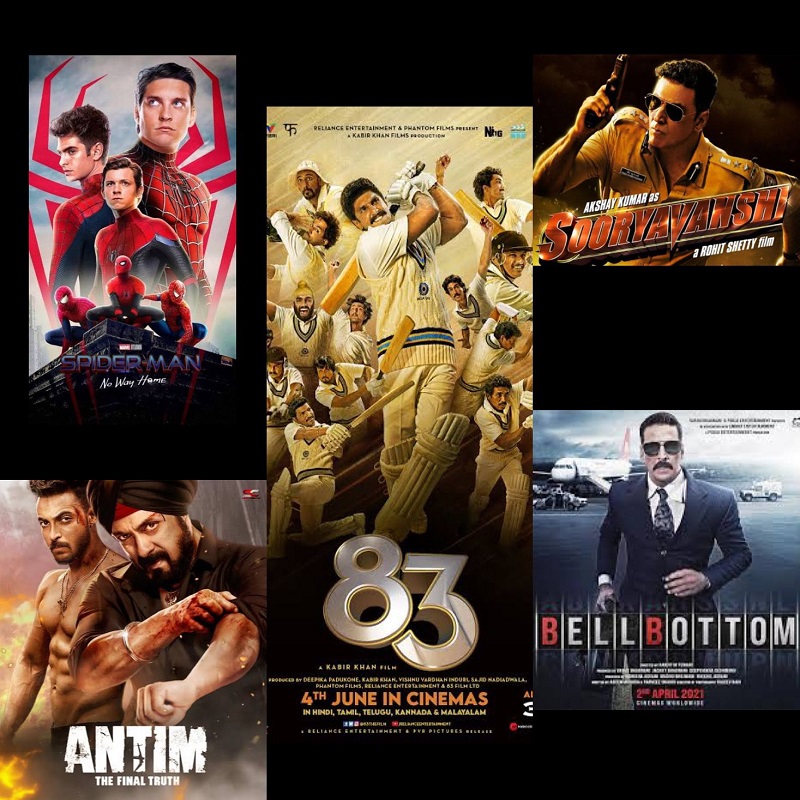 What appeared to be a complicated and not so ideal proposition for making profits and taking risks for many film makers proved it otherwise. In spite of being advised not to release their movies during the pandemic time and to opt for OTT releases, they decided to hold off until the theaters opened before releasing, and today they are surely happy about their decision. For the Indian film industry, the last two years have been challenging, however, long-delayed mega-budget films are returning to big screens in a bid to enchant audiences and bring exhibitors joy. These are some of the films that braved the box office in 2021.

Pooja Entertainment was the first production house to shoot and complete an entire film in the pandemic and also opened theaters at a time when major films were either streamed on OTT platforms or withheld from the public. With the aim of showing solidarity with exhibitionists and cinema owners, Pooja Entertainment on 19th August 2021 released Akshay Kumar starrer ‘Bellbottom’ to allow audiences to return once again to cinema halls, even though they had only opened half-full at that time. The film was a box-office smash after its OTT premiere and also received a lot of praise from fans.

The Akshay Kumar and Katrina Kaif starrer was finally released on 5th November 2021 after many pandemic delays. Additionally, the shooting crew went through a number of changes due to strict COVID-19 regulations, but the film defied all expectations of a lukewarm response upon release by attracting enthusiastic audiences to theaters. OTT platforms are also hosting the cop drama currently.

The Final Truth: Thousands of Salman Khan fans were at the theaters once again on 26 November, 2021 to see his latest film ‘Antim.’ Originally slated for an OTT release, Mahesh Manjrekar’s directorial has chosen to release theatrically instead. There has been much discussion about whether the pandemic finally has put an end to the ‘star system’, but the appeal of box-office magnets like Salman, and their ability to draw crowds to the movies, remains unchallenged. It is a film adaptation of the Marathi movie ‘Mulshi Pattern’ and also features Aayush Sharma and Mahima Makwana.

There has been a long wait for this film to hit the big screen, but judging from the audience reaction, it has been worth the wait. In spite of Omicron concerns, new restrictions on gatherings, and updated pandemic protocols, the film holds strong at the box office. Kabir Khan’s film, which stars Ranveer Singh as one of the greatest performers of all time and is starring a terrific ensemble cast, will make audiences laugh, cry and relive India’s first World Cup victory.

It’s the biggest film of the year , and the second largest opening in the history of Hollywood releases. Moreover, it was the second busiest advance ticket sale in India, and at the time, had beaten global postpandemic records grossing $587 million in the first weekend. In several parts of the country, the film continues to play to full houses.