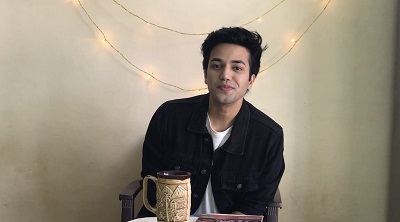 Mausam Dubey is a part of the upcoming series titled Ishqiyoun. He talks about working on the project and the experience of collaborating with director-producer Payal Saxena and Elixir Production.

“Kabhi kabhi mere dil m khayal aata hai ki tu abse pehle sitaaron mein bas rahi thi kahin tujhe zameen pe bulaya gaya hai mere liye… I am a Bollywood kid and this will be the perfect line to define her. I have enjoyed each and every second on the set of Ishqiyoun. The best thing about [Payal] is that she gave me a lot of freedom with the character. She always told me that it’s your character too, so make it the way you want. And I have very good memories of working with the Elixir family, we worked, fought and laughed together. I share a very good bond with Payal ma’am and Himanshu sir. One of the days I was not well and had a high fever. On those days we were shooting my solo scenes after the break when Payal ma’am got to know about my health, she came to me to check if I can continue and I did. When she saw I am not able to manage, she screamed ‘pack up’ and said, ‘I can’t force my child to work in this condition’. She is an inspiration to all of us,” says the actor.

Mausam liked the story, his character, especially his look in the project, and these are the factors that made him say yes to it. He says the make-up that he has done for this role is very different and his appearance is something that nobody can imagine.

“I am in love with the word hero as I have grown up watching all the big stars so I always wanted to be an actor and hero. When I read the script I was just amazed with it and the only thing which came in my mind is that let’s not pass this entertaining story because this will bring a smile to many faces. Also, I am one of the leads, therefore a hero in the narrative. I believe every new project adds value. And, every new project is an opportunity for an artist to grow and entertain the audience by their performances. I hope Ishqiyoun will add value to me because I have tried giving my everything to it and have enjoyed working on it,” he adds.

The actor also liked the title, though he does not bother much about it. Also, not many know that he has also sung a track for the project. “Earlier, it was not Ishqiyoun, it was something else. I don’t go with the titles of the story, the fact that the content is king or hero here made me fall in love with this project. Plus, I was also excited to work with the Elixir team. As far as my singing is concerned, I feel so special that I am not only debuting as an actor but also as a singer. I always keep my projects on a higher pedestal than myself as a performer. So, while working we discussed we are doing a song but then we were confused about a particular song and when I told Payal ma’am about my keenness, she said she won’t take any other singer on board and I will only sing it,” he smiles.

A lot of new age content is being developed these days. “Cinema is changing because the audiences are changing and they want something new every time. You can’t present them with the same food again and again. Ishqiyoun is our contribution towards presenting them something which is entertaining and will hold their attention for a long time,” he adds. Web series are in these days. Plenty of platforms are coming up, who are churning one web series after another. “It’s always good to have options, and if we have more options we can work harder to be on every platform for our audiences and provide them with more entertaining options. It’s up to the audience what they like to watch. Plenty of platforms means plenty of projects and that further means plenty of work for everyone. Therefore it’s always good to have options that work for both the makers and artists and also the viewers,” he ends.